Article 5 La strada -The path taken by our predecessors

Wishing to Walk a Straight Path with Courage and Hope

Article 5 La strada -The path taken by our predecessors

Wishing to Walk a Straight Path with Courage and Hope

Those are the words of my mentor written on decorative paper and hanging on the wall in my office.
With the help of those words from 50 years ago, I will write about “my beliefs.”

I began my corporate life as a businessman after graduating from university, just as I’d wanted. Later, however, I experienced two significant turning points in my life.

The First Turning Point: Experiencing life in the United States 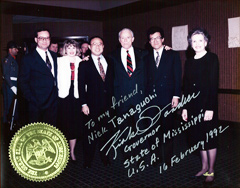 The first turning point occurred approximately 25 years ago, after having worked at a company for 15 years. About that time, I was feeling confident in my job as a salesman, and when I proposed establishing a subsidiary in southern United States in relation to the work I was handling, I was tasked with the undertaking. That is how I gained experience in the manufacturing industry in a small city in the South, where no other Japanese were living.
I suddenly found myself working as the manager of a small business in the United States. Until then, not only did I lack any experience in running a plant, but neither did I have experience in accounting or personnel. I knew nothing about building a plant, hiring staff, establishing a workflow, implementing quality control in manufacturing, or creating financial statements. When I sought advice from my seniors about what to do, I was given a simple encouragement, “an eager amateur wins out over an expert.” I thought it would somehow work out, and decided to work through everything in my own way.
As I went through struggle after struggle, six years passed, and around the time construction began on a second plant in Middle America, my father asked me out of the blue to take over Taiyo Densen. At first I declined because he had told me it was better to work in the big world rather than at a small-to-mid-sized manufacturer of electric wire, and I wondered at the sudden request. However, I was persuaded when he told me that there were employees who had long experiences working at the company. After much soul-searching, in the end I returned to Japan once the prospects for plant operation were determined, and my 22 years as a trading company employee came to an end.

The Second Turning Point: Making a start during the collapse of the bubble economy

When I returned to Japan from the United States, I started anew in a country that was hurting from the collapse of the bubble economy. I found myself at a mid-sized electric wire manufacturer, which was an entirely different environment from what I had become accustomed. At first, I didn’t understand a thing when I visited clients, made appearances at industry groups, and attended in-house meetings. It was as if everything was being conducted in a foreign language, so I decided to launch my career at Taiyo Densen by working through everything in my own way. Others apparently viewed me as a “strange person” who had come to the company. The collapse of the bubble economy was a harsh trial for Taiyo Densen, but the environment was probably conducive to communicating my ideas to the company. Without my experiences in the United States when I had to ponder, “Why am I doing this in a trading company?” I wouldn’t have been able to run Taiyo Densen well. Life works in mysterious ways.

My father was president of Taiyo Densen for 23 years. I heard he used to run a one-man business. I thought that should be changed and advocated organizational management. However, environmental change was dizzying, and after experiencing the “lost 10 years,” the “IT bubble,” the “rise of BRICS,” and the “collapse of the Lehman Brothers,” 18 years passed while I yelled at my employees to strive for “change, speed, and growth.” I realize now that organizational management is shockingly far from the current reality, and am astonished. Thinking rationally, I’ve always been running a one-man business since 25 years ago. In the end, I think I lack the ability to become a business manager any greater than that. However, two years ago, in the 85th year since our company’s establishment, I changed the company name to Taiyo Cabletec, and under the pressure of internationalization, I am keenly aware that the building of an organizational management system capable of speedy response is essential to the survival of our company.

Always maintaining “courage and hope” for the sake of your employees and walking a straight path does not mean following a single path. Rather, the path we are shown is the straight path, and I am grateful for having been allowed to work as a businessperson along that path.
Perhaps after 50 years, I have come to understand a little of those words my mentor wrote.